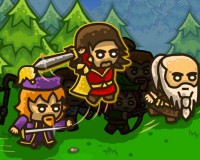 A game in the style of strategy, Summon The Hero is also a tower defense game. The game starts by choosing one of the heroes from 3 different features first. Dec. This hero will be the last character who will defend the tower against the enemies. The battle begins with the tasks that come via in-game mail. New features can be added to the characters with the gold coins collected by completing the tasks. Summon The Hero gives you unlimited time to determine your strategy before starting each battle. And during this time, you can start the battle by placing any of the 4 characters that will be used in the game at strategic points. These characters are listed as Warrior, Shooter, Wizard and Shaman. Warrior, a close combat character, provides slow and powerful strikes. Although the shooter character has little strike power, he throws his arrows fast.

The Wizard delivers medium-power hits, while the Shaman character stuns enemies who approach close. In turn, it is also necessary to take into account that there are enemies with different characteristics. Summon The Hero offers you different amounts of ‘mana’ at the beginning of the battle. With these mana, you can choose your characters and replenish the strength of your characters who have weakened during the battle. There are 30 mana drops per character.  Don't forget to collect the mana that falls from the enemies you defeat! So you can increase your combat power. get ready for the immersive metaphor of this game consisting of 18 missions.