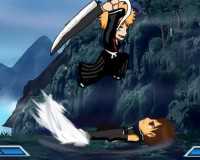 Another game on our fight game page. Anime Fighting Jam! You will have no duty but to fight in this game. You can fight as hard as you can to destroy your opponents. After the game opens, you will get help from the J button to select the character and start the game. The battles will have gained a two-part Area consisting of three divisions. In Anime Fighting Jam, we believe that you will overcome this. One of the Japanese Animated Series is close to fighting! What more do you expect now is the time for Anime Fighting Jam! Enjoy yourselves