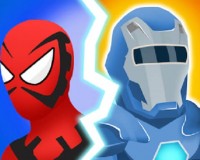 Everyone knows superheroes. Especially after the idea of becoming a superhero, which is the dream of children, they want to save the whole city from people or they want to do different things using their own special powers. It is up to you to protect the city from aliens who have liberated the city with the Tue Hero Masters game. The streets of the big city are full of aliens and you have to eliminate those aliens one by one with your superpowers in your hands. As you play the game, you will get different powers from each other, while the aliens in the city will become even more powerful than you think. Each hero has his own special powers, as well as these powers are always being upgraded. With the boosts located on the right side of the map, you can earn extra powers for your own abilities, as well as buy different superpowers from each other from the shopping option. In addition to the powers you have purchased, you can also put other powers that you used to have.

Your maps change as you skip level. In the following levels, you can create differences for yourself by purchasing special costumes for yourself. It is very easy to play the game from a computer, tablet and phone. With the help of the mouse and the touch screen, you can kill your enemies. In addition, you can destroy bosses in a short time with the help of explosives found on the map.