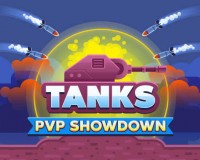 If you have crawled out of the war paints and you have packed up your ammunition, a tough battle awaits you with Tanks Pvp Showdown. Exciting in real time, this PVP game doubles the excitement due to the fact that it is a multiplayer and live-played game.

If you have started the engine of your tank and are ready to fight with enemy tanks, now is the time to make strategic moves! In this game, where you face many players and fight fiercely, you have to act very carefully and quickly to become the winning side.

Choose the right option for you among the many different weapon models to inflict large-scale damage on your enemies in this breathtaking competition Dec. Tanks PVP Showdown You have to earn money to have new tanks and unlock tanks among many new tank models Decked out. The more you kill your opponents, the more money you earn and have new combat equipment.