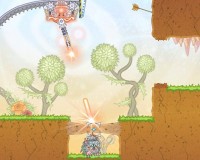 With Laser Cannon 2, it is now very easy to kill the monsters on your maps. It's a huge map, it's full of monsters inside, and monsters want to destroy your world. But you are a laser machine, and you just need to press one button to eliminate all the monsters! Especially for those who play from a computer, this one-on-one game is very simple to play.

To move your laser, you need to use the W A S D or direction keys. In this way, your laser will move forward – backward, right – left in the area it is standing on. Just press the left mouse button to get the power-ups located on the map and shoot the monsters. To use the power-ups you received from the map, you need to hold down the left mouse button and release it. There is also an area at the bottom of the map where you can turn on and off your level, how many shots you have made, how much power you have to be able to hit hard, the volume of music. Just as you turn monsters to ashes with a laser, you can create explosions using the nuclear balls found on the map, and you can also get huge explosions thanks to the explosives found on some maps. In the game you can declare yourself the task of finishing the levels in the fastest way with the fewest shots!