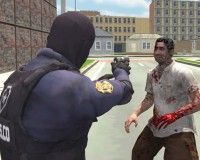 In the online game Grand Zombie Swarm, are you ready to do your best to destroy the zombies on the condition that you survive as a special forces cop? Your task in this game is to keep a zombie invasion away from the city and as a special forces police officer, you are assigned to destroy the zombies using the weapons you have. Another task is to survive in the Grand Zombie Swarm game. Are you ready to do your best by acting logically and fulfilling these two missions? So now get ready to fight against zombies in this fun zombie game. After each level, you will be given a weapon, which will be your favorite weapon? We wish you good luck and have fun in the game Grand Zombie Swarm.