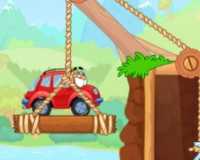 You don't have friends who don't know Wheely. Have you ever had so much fun with Wheely 8 ? So let's give you some information about the game and then start having fun.In this version there are many beautiful sections and beautiful compelling obstacles waiting for you. If you think logically, you can easily pass each section. In most episodes Wheely 8 will also meet a single difference girl friend pink car. Now in a few episodes, we've crossed the hurdles by finding the location of the three stars without getting too caught up in it. What about you ? will you be able to get Wheely 8i to meet his girlfriend by doing the things described in this game ? Good luck