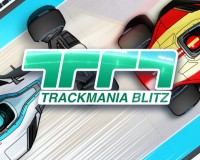 Being a racer is the dream of everyone from small to large, there are many people who focus directly on the screen when there is a small screening on television. With Trackmania Blitz Game, your love of car racing will take you to the first place. Crazy jumps, fast turns, turbo boosts and more are waiting for you in the racing game that you can play in 2D. Being a fast and challenging racing game, you should try to beat the real players due to the fact that there is multiplayer in this game. To play the game, you just need to touch the screen on phones and tablets, while on the computer you just need to press the direction keys. The golden prize awaits you when you are the first when you compete with real contestants with different game modes from each other. Races on different maps, from timed races to indefinite races, have been presented to you.

With the emojis and chat section located in the lower left corner, you can send emojis to the contestants behind you on your way to the final or talk to them. At the same time, with the coins you earn, you can change the color of your car, make extra modifications. Using the accelerations on the map logically, you can make the contestants swallow your dust behind you, and you can finish the competition in first place by quickly passing through the hard curves and looped roads on the roads. At the same time, you can break each of the records to settle on the world leaderboard on other maps in the game.