Kingdom of the Wind 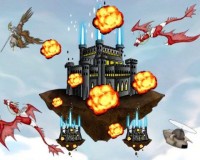 Maybe you knew this as a series before and you just heard that there is such a game. Yes; That's right, Kingdom of The Wind is a 36-episode historical series. But now put aside the TV series and the games you used to play. Something completely different lies before you! You will fight with various enemy units in the game. But here; 'What's wrong with that? A classic war game. It's always the same thing.' With its visuality and fiction, this game manages to distinguish itself from the others.

This is a game where dust mixes with smoke, the wind dances with the clouds, and allows you to explore the sky. What you have to do is to defend your tower and protect it from the invasion of enemies. If you can't do this, the castle will turn into 'ash'. Fortunately, you will have an army and equipment at your disposal. Different spots, unique abilities, fantastic environment; all just a click away.Are you ready to be the commander in the wind war, to defend your tower, to show your enemies how many parts of the world the world is? Be on your guard against the enemy army that is trying to take over your city and comes at you like a fierce wave! Developed by Rudy Sudarto, this action game comes to introduce you to a whole new dimension of excitement. Let's see how strategic a person are you?