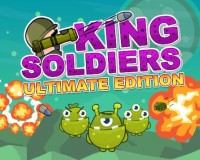 If you are ready to prove that you are a talented soldier, King Soldiers Ultimate Edition is a game designed just for you. This game, in which you will try to aim and hit accurately, is also designed in accordance with the laws of physics. This game, in which frogs are targeted, consists of 84 entertaining sections. This game, which clearly presents the goals to you in the first sections, becomes more difficult in the following sections. But this should not scare you, because King Soldiers Ultimate Edition gives players the right to unlimited ammunition. Nevertheless, it is useful to use these ammo wisely, because the less you use, the more stars you will earn. In this game, bazooka is used in the first levels, there is also the possibility of using bombs and even exploding snowballs in the following sections. The frogs in the game can also surprise you in the advancing levels. Other elements that make this game fun are; moving platforms and obstacles that make it difficult for you to aim.