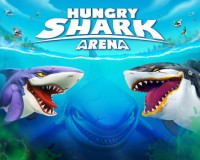 Imagine that you are a shark in a huge ocean. All the fish in the ocean, floating people and everything that can be eaten are in your hands. Strive to become the biggest shark of the game to get the upper hand in the Hungry Shark Arena game. You can destroy your enemies smaller than you by eating all the small to large fish found in the ocean. You have to try to be the last shark standing completely in the game. Remember; the shark that is the biggest in the game is the permanent winner.

As you play the game, you will focus on the game in an addictive way to become an even bigger fish. As you collect the coins found in the ocean, you can change your shark with the gold you get in each match you win. In the shopping section, you can buy sharks of different shapes and characteristics from each other, as well as make yourself a costume collection with all the money you have saved. You can divide your sharks into categories such as fighting, hunting and charged. All three shark species have different speed, strength and fighting characteristics from each other. You can also play the game very well from a computer, tablet and phone. It is possible to play with the help of the mouse and the touch screen only by touching it. The more powerful and capacious you have, especially sharks, the faster you can win the game.