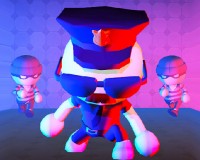 This fighting and action game developed by Hihoy can be played online for free via the browser Robber Vs Police: Fighting Game. Are you ready to take down the thieves with just one punch? In this game you are a police officer. Therefore, you should always be prepared for a fight and keep your fist strong. There is a possibility that you will suddenly encounter thieves in an unexpected place! Fighting techniques like wrestling, karate, kickboxing or boxing will help you win. The gripping scenario of the game is briefly as follows: It is late at night. The station is animated with a message: Robbers are on a night hunt! They're obviously up to dark business. Robber Vs Police: Fighting Someone needs to tell them to stop. The brave policeman is alone in the police station and has no time to wait for help. He goes to the crime scene alone in the pitch dark, in order to pin the robbers down and then bring them to justice. How would you like to join him and overcome the thieves together? Thieves will come against you and attack you with all their might. His name is 'thief', he doesn't pick pears, does he? So take a look around first, make the right move and show off the thieves! However, knocking them out may not be as easy as you think. Robber Vs Police: Fighting With its unique game simulation, effects, animations and 3D graphics, this game is fun and funny, but also very exciting! So don't stop! Hit the play button and show them all what a strong cop you are!