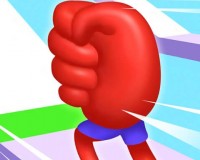 With Mora Rush game you will push the limits of your guessing ability. Everyone knows the game of Rock - Paper - Scissors. Usually people play the game of stones, paper, scissors on a certain claim. You are in advance of putting forward a claim while playing this game and you must apply the claim placed in the eliminated. In this game, you can also play rock – paper – scissors without the need for any friends. Until the last moment of the map, you are faced with certain obstacles. In these obstacles, red is the color of the stone, blue is the color of the scissors, and green is the color of the paper. The red-colored obstacles of the stone consist of long or thick walls, the green-colored obstacles of the paper are difficult and narrow roads to pass, and the blue-colored obstacles of the scissors consist of bands that can be cut of different sizes. You need to overcome these obstacles correctly until you reach the end of the map. Then, it is possible to prepare the hand in the form of rock – paper or scissors that was presented to you at the end of the map in a suitable way and finish the level. It is also possible to earn different obstacles and hand shapes according to the points you earn at the end of each level.