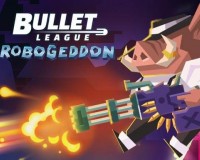 Are you ready to experience your most successful animated weapons in Bullet League Robogeddon? Your enemy is a cold, callous robot army. What the target is going to be ? It's very simple, you have to do your best to be the last man. This bold weapons competition is with you as a highly developed version of the games you have ever played. Bullet League Robogeddon game has been developed in 3D, so you won't have any problems during the game. You can also play this game for free without any membership or discount. Are you ready for this deadly gun battle ? Then do your best without waiting any longer and fight to be the last man. Good luck with the Bullet League Robogeddon game.