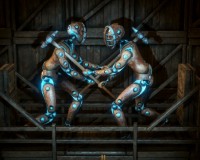 Hi, we brought you a strange game. Striker Dummies in the game, your mission is to fight test dummies. At the beginning of the game, you will be asked to make a choice first. Are you going to play against artificial intelligence or real players? Since the game can be played for two people, you can also fight with a friend in this game. You can easily control the game. All you have to do is press the keys on the keyboard. Striker Dummies are you curious about his game now ? Then you can have fun starting this game right away. Your only goal in the game will be to do quite a lot of damage to your enemy on the opposite side, of course you have to kill. Now you can lose the game at first, but this does not mean that you will lose the entire game in the game. Striker Dummies do you want to experience your game? Good luck to you guys now.