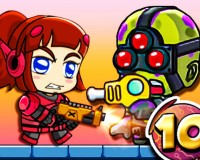 With the Zombie Mission 10 game you will experience Nirvana in action games. Prison Breakout continues with the episode! The underground prison has been taken over by zombies and you have to rescue the hostages, as well as help the wounded. With the new expanded version of Zombie Mission, you have to fight through 30 LEVELS! There will be 7 different bosses in different levels. The strongest boss is of course waiting for you in the final episode! You need to feel ready to cut bosses. So don't forget to buy and upgrade weapons with the coins you earn as you pass the levels! The more you strengthen and upgrade your weapons, the easier it will be for you to cut down the bosses that will come across you in the next levels. Zombie Mission 10 You can play the game both as 1 Player and as 2 Players.

We also recommend that you start in the "Normal" mode when playing the game for the first time. Those who want to play the game from the computer can move with the W A S D keys, throw bombs with the F key, jump with the G key, change weapons with the W key, and walk on the wall. Another option for those who are going to play two-player is that you can move with the arrow keys located on the keyboard, shoot with L, drop bombs with L, jump with K, change weapons with the Up arrow key.