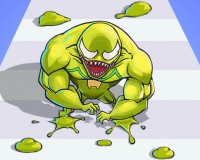 Do you know slimes? With Slime Warrior Run, you can become the most powerful being in the world by turning into the most gigantic and powerful slime person on the map. Collecting the yellow slime pieces found in the places will make you the biggest slime person in the world. So, is this the endgame? No! In each level, you will have to escape from people who want to kill you, but as you grow up, you will start eating the enemies in front of you. You also need to make long jumps, obstacle climbs, during which there is a possibility of being killed by a tank while eating your enemies throughout the map. Remember that every time you take damage in the game, the slime that sticks to your body dies. With the extra arms that come out of the slime when you escape from the soldiers who are shooting at you, you can bring them to their end as they get closer to those men.

The fate of the entire city is in your hands! If you want to become stronger, you need to escape from obstacles, collect all the slime and destroy your enemies. The older you get, the faster you can destroy tanks. Thanks to the colorful graphics of the game, a small addiction to the game will occur. Playing this game is also very easy on computers, tablets or phones. Those who want to play via computer only need to move the mouse, while those who want to play from phone and tablet only need to touch the touch screen. Saving the city with Slime Warrior Run is now in your hands!