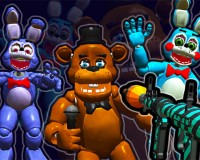 FNAF Shooter, which has an important place among first-person shooter and shooting games, has been released recently. Developed by GoGoMan, this game will make you feel the excitement at its peak. You will have to defeat your enemies with triple weapons. Triple guns? This should not discourage you too much, because fighting the enemies will not be as easy as you think. You need to improve your weapon. Whether it's accuracy, firepower, or whatever you call it, you're going to need upgraded weapons. Moreover, you have to do all this at night.

Use mouse to shoot, spacebar to jump. FNaF Shooter Game Be careful when planning your moves because one wrong move can get you in trouble. You play a security guard in the game. Your character needs to complete multiple levels. With one difference; each more difficult than the other! How can it be easy for you to fulfill the tasks given to you when bad people are after you?If you have a fighting spirit, you won't let them catch and kill you. Good news; When you successfully complete each level, you will have money and buy various upgrades. With these, you can strengthen your weapons and equip new armor against your enemies.

Assassin robots lurk, waiting to hunt you down; Don't be idle against them either! FNaF Shooter Yes, you are all alone in a deserted town, but you have weapons and above all courage!