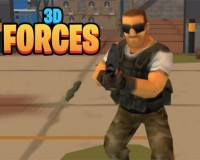 Hello, we have brought you a brand new io game. Try to win all matches with your team by joining a team in 3D Forces. You'll be in a big fight with your team to destroy the opposite team, can you do that? Since the game is an online game, there will be people in front of you, so you don't know what your opponents will do in the 3D Forces game. You must cooperate with your team to destroy the opposing team by acting logically. Since the game is developed in 3D, you will not have any problems with the graphics. Now, before you waste any more time, print your name on the leaderboard in the 3D Forces game. We wish you good luck and have fun. May Luck be in your favor