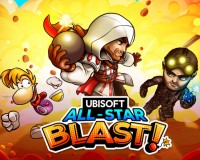 With its wide map and hero advantages, it is a game that has a wide gameplay capacity with the reference of Ubisoft. Ubisoft All Star Blast Game With the Ubisoft All Star Blast  Action game, it's up to you to kill your enemies who are trying to kill you with bombs on a wide map. As soon as you start the game, you need to collect the resulting items to increase the number of bombs, increase and strengthen the explosion distance of your bomb by detonating each of the boxes around you with a bomb presented to you. As you collect items, your time starts to narrow down to kill the enemies around you. After a certain period of time, as the four corners of the map begin to narrow down, it is up to you to defeat the enemies who are lurking around you to kill you.

You can buy new costumes for yourself with the shopping option located on the game screen. In order to buy these costumes, you need to get gold coins by winning games with the right strategy. At the same time, you can make the power-ups that you get when you explode chests even more powerful with the gold you get. This game is easy to play from phone, tablet and computer. Those who are going to play from the computer should use the directional keys located on the keyboard to move the hero, while they also need to get help from the mouse to drop the bomb. It is up to you to defeat your enemies in interesting strategies with the Ubisoft All Star Blast game.