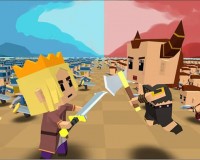 Tiny Clash Game is a huge army building game from a small army. Throughout this game, you are in a war with soldiers from the first level. After each level, the strength of the army you come across and the amount of reward you will receive each time you defeat the army increases. You can get second-level soldiers by dragging the first-level soldiers on top of each other, and you need to apply the same tactic to get stronger soldiers. With the cards at the bottom of the screen, you can level up your army by buying new soldiers with the gold you earn from the wars. In the same way, you can fight with the army in front of you by pressing the "Fight" button on the button where you bought the cards.

It is very easy to play, both for those who play on the phone and those who play on the computer. You just have to drag the soldiers. It is possible to obtain new different types of heroes and special powers for each level you pass. Another way to earn money in the game is to leave the screen open and let the heroes get money. You can buy different things with the "Shop" button on the left side of the place where you bought the cards. In the "Heroes" section on the right side of the cards, you can get a stronger army by upgrading the different heroes you obtain.