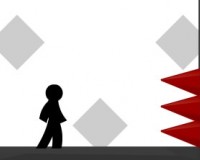 We have a new news for those who like stickman game! 8 Of this fun game. the version has been published. Are you curious about the new updates in this fun game that has appeared again as Vex 8? First of all, the game makers have left you in a state of curiosity by stating that they will constantly update the game. There will be new versions of the game coming later, and there will also be new levels and actions rated according to difficulty in these future versions. 8 Of the stickman game. a lot of new features are waiting for you in the version. Firstly, there are 5 difficulty levels with increasing actions. You need to complete these actions by the end of the chapter without any problems. In addition, with the coins you have collected on the way, you can also activate the character styles offered to you for a total of 20 Pieces locked. The developers of the game have mostly touched on the mobile version, so they have increased the game to 60 FPS, considering your convenience in this game, which can also be played on a phone and tablet. They guarantee that you will not have any problems with the speed of this version. For this reason, you will have a lot of fun playing the Vex 8 game. Let's start playing the game right away without wasting any more time, whether it's on the phone or on the computer, and let's have fun. We already wish you good luck and have fun.