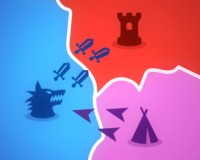 It is a strategy game that you have not seen before. When you start the game, you need to focus on defeating other people fighting with you with the color you choose. In the game directly, a country is divided into regions. While you start this game as ten soldiers, your number of soldiers increases according to the regions you have captured in the country. Your simplest goal in the game is to capture the entire country. While capturing the country, you have to protect the places you have captured, and on the other hand, you have to destroy each of the enemy colors one by one. States.io As the level progresses, the color of the enemy you encounter increases as well.

It is possible to increase the color of the enemies as well as the increase of soldiers and power. So, how will you be as strong as them? At the end of each level, you are given a certain amount of gold as a reward. Thanks to these golds, you can increase the number of gold you get per level, speed up soldier regeneration and increase the number of your soldiers. Thanks to the strategy you will determine, you can reach the victory with fast steps, or you can say goodbye to your journey to victory by succumbing to the insidious plans of the enemy troops. Apart from these, you can speed up your development by watching videos, you can choose a different color for yourself, a different shape for yourself and more!