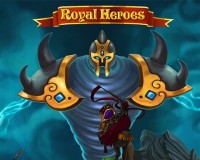 Dear gamers, if you are ready, the exciting adventure in the cursed kingdom begins. Welcome to the cursed land where dark magic and dangerous creatures haunt you in the dark. Royal Hereos, where you will step into breathtaking adventures with a fantastic story, is a game world where you need to strategize. Have an army of legendary and powerful heroes and destroy them by fighting with groups of monsters that never give rest. Cleanse your country from all evil creature and black magic, curse by destroying your enemies.

Rule your kingdom in Royal Heroes, where you can build your own castle. By spending your loot wisely, you can hire an army of legendary heroes to protect your kingdom. Start the game now to protect the territory you own from the attacks of the hordes of black magic!

When you start playing Royal Heroes, you can choose heroes to create your army. But be careful that your money is enough. After creating your army, place your heroes strategically and start fighting with your enemies. With each victory you win, you fight with a new army. When you complete the level, you are entitled to move on to the next level and fight with new enemies. You can see both the duration and the decrease and increase in the strength of the armies of your enemies. Now is the time to embark on a breathtaking adventure and save your kingdom from the hordes of black magic, curses and enemies!