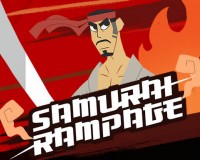 An endless action awaits you with the Samurai Rampage game. Our samurai in a gray suit and a red bandana needs to defeat his high-level enemies who come across him on a journey that has no end. You have to help him. In the later stages of the game, where you start by cutting off creatures with certain powers and lives that come across you, you need to kill each of them quickly, while enemies constantly flock in front of and behind you. Of course, the game is not that easy. As you progress through the levels, you encounter bosses that become harder to kill every second. You need to focus on killing quickly by shooting at the weak points of the bosses.

There is a ‘Shop’ option waiting for you on the main page as soon as you die in the game. From here, you can improve yourself by getting extra lives, shields, critical hits and powerful attack items with the gold you get when killing monsters. While improving yourself in the best way, you can cut bosses faster, as well as try different combos on the creatures you encounter. For those who want to play the game from the phone and tablet, all they have to do is click on them to kill the monsters. Those who will play from the computer can defeat monsters with the help of the mouse. With the Samurai Rampage game you will feel yourself as a samurai!