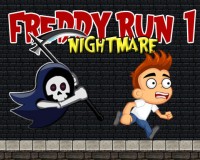 You can play this online game in full screen. Freddy Run 1 Game Your character is a young boy named Freddy. It all starts with Freddy having a terrible dream. Scary events are not limited to dreams only. Freddy's life turns into a complete nightmare. What you have to do is save him from this nightmare. The game takes place in a haunted castle. But when you say fairy, don't think that you can destroy your enemies with magic. You will be surrounded by dangerous monsters all around you. Not to mention dozens of deadly traps! You will pass through 5 different levels. In these levels you will encounter the 'evil hunter'. Freddy Run 1 Where did this hunter come from while he was already dealing with monsters and trying to dodge the traps? We hear you say. It will be annoying to try to deal with it when you have so much trouble, but it will increase the excitement in the game. You can increase your score by collecting gold coins during the game. You will get an extra life when you get 100 points. You will have to jump through deep pits, avoid spinning blades and spikes. You have to successfully dodge dozens of obstacles like this, sometimes jump over them and sometimes slide under them. Freddy Run 1 You must eliminate the opponents you come across by shooting. As we said, while doing all these, you should protect yourself from the soul hunter who follows you step by step. Soul's Catcher coming after you, you need to be very careful as you look for opportunities to attack from behind. Wherever you find gold while escaping, take it so that you can reach 100 and gain a new life.