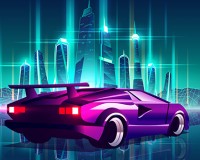 As is known, there is a traffic race in the Galactic Traffic game, which is similar to the classic car racing games but does not tire the player. It is possible to play the game from the phone with an easy login screen, those who use the direction keys to control the car, as well as those who play from a computer using the A W D keys. You need to collect the coins around you until you reach the finish line and don't hit the cars passing by you. At the same time, you can reach the finish line faster by collecting the power-ups that are on the way. Thanks to the power-ups, hitting the vehicles in front of you also does not prevent you from passing the level. With the money you have saved, you can change the model of your car.

It is a game that can fill your free time in your daily life. Thanks to the stunning graphics of the game, it is a game where you can have fun in less time than games that require high space. It is possible to compete with your own score with longer-running final lines throughout the game. When passing your own score, you can buy different and high-priced cars from each other, burn other cars with the effective exhaust fumes of cars. Just as you are more likely to hit other cars while collecting the bags of money that will appear in front of you along the course, you are more likely to provide and overtake other vehicles while collecting small coins. Thanks to the power-ups, you can quickly reach the final without hitting other vehicles in traffic.