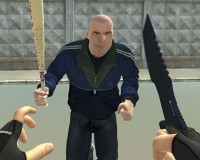 Russian Battle Royale game is a very competitive gang game that takes place in the neighborhood. Your task in the game is to choose one of the weapons found more than one from the ground to shoot down the gopniks, which are your enemies. Since the map is quite a large map, finding weapons will be a bit difficult, so you have no choice but to hurry. Russian Battle Royale is an action game that has managed to be among the very popular games that have gathered a large audience on the screens since its release. Therefore, you have a place in this game, and the Russian Battle Royale game is waiting for you. Good luck, have fun.