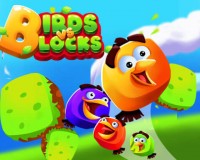 With the Birds Vs Blocks game, you will both question your math knowledge and be filled with endless fun. The bird, which has the shape of a blue box, and its red cubs behind it, is going on a long journey. In the bird game that you started with a certain number of birds, your bird number increases as you collect the numbers in the rounds that you come across on the map. However, you can chew the boxes with your birds by going to the one that best suits the numbers on them that appear on the map. One thing to remember is that you need to go through the boxes by selecting the most appropriate number on the boxes. Otherwise, it will cause you to lose each of the birds that exist behind you because of the boxes and say goodbye to the level at an early time. Your goal in the game is to collect the most birds and then try to pass the levels by choosing the most logical boxes. You need to focus a lot in the game and then move quickly.

Those who want to play the game from the phone and tablet need to drag the birds. If you want to play from a computer, just play with the mouse. Do not avoid focusing on dragging your flocks of birds to the lowest numbers. Your hand will also speed up with each level to pass your own scores, and you will solve the logic of the game even better. Don't forget to pass the unlimited levels with the shields you come across in Birds Vs Blocks game.