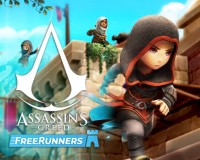 Everyone knows the Assassin's Creed game from seven to seventy. In such a way that everyone likes to play on the computer, as well as his films have been appreciated by everyone. You can also enter the race as an assassin in the Assassin's Creed Freerunners game. To get to the final, you need to jump over obstacles without slowing down, climb over walls, make long jumps. You have to deal with the obstacles that are waiting for you throughout the map, and you should not forget about your opponents who are trying to cross you. You can buy yourself different levels of assassin clothes with the gold you get for each game you earn from the shopping option on the game login screen.

Remember that all the clothes you will buy will add extra features to you. These features can be listed as speed, climbing, an excellent jump and many more. At the same time, the number of gold coins you earn increases according to the level of excellence of each obstacle jump you make. So much so that if you wish, it is also possible to participate in world ranking competitions and win big prizes in this game. As an assassin, playing this game from a computer is very simple. It is also possible to use the space bar to make jumps or double-jump, as well as to make clicks with the mouse. Get ready for a flawless racing experience with Assassin's Creed Freerunners game!