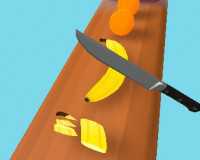 Whose hand is faster ? Now in this game you will perform a similar task as an experiment. Slice Rush! with a knife you will try to get the highest score by chopping the fruit on the table. But there is a subject to be considered when playing this game on behalf of surprise placed in the middle of the boards as soon as you hit them will slow down your speed. We had a lot of fun playing Slice Rush, but don't you want to be part of it ? Who do you think will get the highest score by the end of the game ? We believe you will reach the highest scores in this game. Have fun with Slice Rush already. Good luck